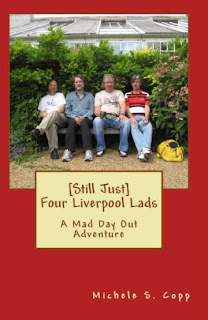 This is book one in a series. Beatles fans around the world will enjoy reading this fictional account of the Mad Day Out adventures a group of die-hard fans.

What if the Beatles had secretly reunited in the 70’s and recorded an album of their best work in complete secrecy, but hid the work away after another break up? And what if you discovered this information 40 years later?
Follow the action and adventure in this fictional account of a group of Beatles fans who stumble upon a clue and set out to find this unreleased music.  Their hunt takes them from Scotland to the Isle of Wight and it appears that someone else is determined to get to the music before them.
Beatles fans around the world will enjoy the exploits this group of die-hard fans experience in their efforts to follow clues left by Paul 40 years ago as they set out to prove that this music really existed.

The second book in the series, "Charmed and Dangerous" will be published in April 2015.