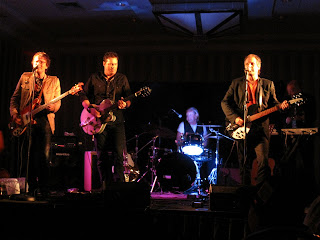 The Norwegian Beatles
Had a great Labor Day weekend at Abbey Road on the River at National Harbor.  Last year I attended for just one day (it's a 5 day event), made 5 minute video about it, entered that video in a contest and won!  My prize was two nights at the resort where it is held and two 5 day tickets for me and a friend for this year.  So my cousin Kelly and attended this year from Friday afternoon until Sunday afternoon and boy did we have fun.

I made sure I saw the bands I discovered last year (Apple Core Band and The English Channel), but together Kelly and I discovered a more must-see bands from around the world including Old Brown Shoe (Netherlands), The Norwegian Beatles (obvious where they are from), Mario and James DaSilva (originally from Brazil), and Jukebox (from Puerto Rico).

Since returning I have collected a bunch of new FaceBook friends from the event including members of some of the bands but the best part is that my cousin is now a true Beatles fan and is excited at the thought of returning to the event next year.

The only sour note was that the organizer who awarded me my prize was not very nice to me when I contacted him about the details about my hotel reservation.  In fact, he never did call or email to tell me I had a reservation.  I had to contact the hotel to find out.  The bands all seem to like him, but the emails I got from him were jibberish and insulting.  I can't understand why.  He acted like I was a pest, but he could have easily emailed me to tell me how the process would work and even told me to contact the hotel.  I am not a mind reader.


Posted by Michele Copp at 7:37 PM
Email ThisBlogThis!Share to TwitterShare to FacebookShare to Pinterest